“There are little Indian girls out there who look up to me, and I never want to belittle the honor of being an inspiration to them. But while I’m talking about why I’m so different, white male show runners get to talk about their art. I always get asked, ‘Where do you get your confidence?’ I think people are well meaning, but it’s pretty insulting. Because what it means to me is, ‘You, Mindy Kaling, have all the trappings of a very marginalized person. You’re not skinny, you’re not white, you’re a woman. Why on earth would you feel like you’re worth anything?’”

As part of my new series highlighting strong contemporary female role models that I want my daughter to be exposed to, I’d like to talk about one of my favorite comedians, Mindy Kaling! I have read both of her books (Is Everyone Hanging Out With Me? and Why Not Me?) and in doing so have learned a great deal about her path to her current success. It turns out this girl works super hard! I used to have this baseline assumption that all famous people just kind of get discovered without doing a ton of work to get there. This is not totally unfounded if you look at all the YouTube sensations and successful lifestyle bloggers out there. However, back in the day before the influences of the internet, people actually had to hustle to make it in show biz. What’s even more incredible is that Mindy was able to achieve all this as an Indian-American woman who doesn’t fit into expected beauty standards — either American or Indian. Whoah. 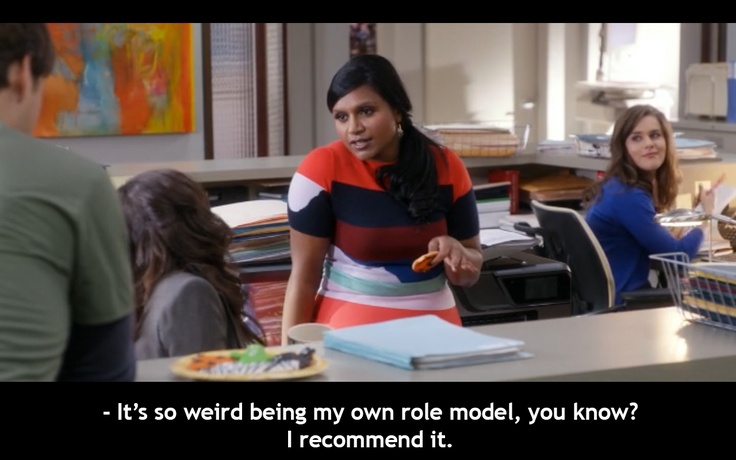 From reading her her first book, I learned that Mindy interned at age 19 for “Late Night with Conan O’Brien” and was a writer for “The Office.” She was nominated for an Emmy for one of the episodes, and was initially the only woman on their staff. She also directed a few episodes before becoming an Executive Producer. I thought she was just that quiet nerdy Indian character, but my respect for her skyrocketed when I learned she had such a large role in the show’s success. When “The Mindy Project” aired, I immediately loved it and am so glad she’s got a cult following. I think Fox Network made a huge mistake by not signing them for a third season, but all the better for Hulu! (Anyway who even watches live television anymore? It is more fun, convenient, and cost-effective to use a streaming service like Hulu Plus or Netflix these days. Plus, my hatred of commercials keeps me away from live TV as much as humanly possible.)

But back to Mindy. In her early career she and her best friend co-wrote an off-Broadway play about the friendship of Matt Damon and Ben Affleck; it ended up being a popular play that garnered a lot of attention at the New York International Fringe Festival. I wish I knew about it at the time! I’d love to see Mindy in action as Ben. She had also done stand-up comedy and decided to shorten her last name (Chokalingam) to Kaling so that it could be easily pronounced and not made fun of (I feel that pain!) Another thing I love about her is that her character on The Mindy Project is named Mindy Lahiri after one of my favorite authors, Jhumpa Lahiri. Mindy, you and I would be BFFs!

Moving on. Mindy has accomplished so many wonderful things such a short amount of time. Comedian, show writer, producer, director, actress, author. I really love her sense of body acceptance as well as her colorful style. Even her office is so vibrant and energetic! I respect her for embracing her heritage, highlighting her ethnicity and portraying her Indian family on The Mindy Project. I commend all of her accomplishments as she continues to battle the hurdles that women faces in her industry to rise to new heights of success. And of course, I can’t wait for The Mindy Project to return next month! 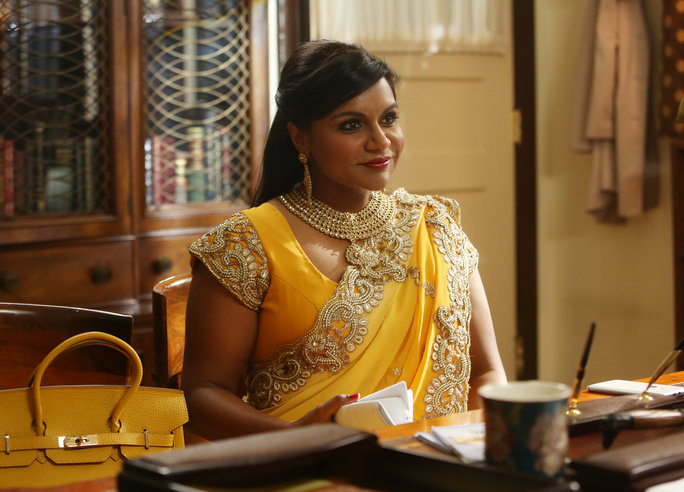 “My role is not just artist. It’s also activist because of the way I look. On so many shows and movies, race was a gesture, and in mine it’s the premise. I can’t ignore that what a lot of people see is an Indian woman who doesn’t look like a Bollywood star. It piques their interest, and they’re not bad for wanting me to tell stories about it, and I’m not wrong for not wanting to. I want to fill my desire to write vibrant, flawed characters, but then also be a role model to young people. It’s stuff that I think about all the time. Some people don’t have to think about this at all.”