Ugly Betty first aired in 2006, but I did not start watching it until around 2008 when a friend lent me her season 1 DVD set. Like most television shows, I had only seen an episode here or there, being unable to commit to a weekly ritual (a combination of being in school and not having a television made watching TV a treat only when I was home for weekends or breaks). I started watching and soon became hooked. I have since watched all four seasons of the show twice in their entirety. I know, being cancelled after four seasons doesn’t say much, but it didn’t stop them from winning two Golden Globes. Those four seasons were plenty to pack in the many varied themes in this soul-warming novela of sorts.

Ugly Betty is one of those shows that can appeal to almost any audience. It has something for everyone; even my husband can tolerate it. Being someone who isn’t very much into the fashion/modeling scene, it may seem surprising that a show about a fashion magazine would appeal to me. Not to say I dislike this aspect; on the contrary, I love the beautiful clothing and accessories (especially those of character Wilhelmina Slater, played by former Miss America Vanessa Williams — her clothes are just fabulous!) However, one quickly learns after a few episodes that it is about so much more than just fashion.

Betty is a character who I can really relate to. I love that she is a complete nerd and just accepts it. The braces, the eyebrows, the hair — it all screams “awkward youth” and it is something most of us have experienced at some point or another. No matter how secure in one’s appearance, an old middle school photo is enough to make the innards cringe at the horror. Ok, it might not be that bad for some, but it definitely is for me!

In spite of, or because of, her outer shell, Betty has a gorgeous heart and an intelligent mind that bring her much success and happiness. Not without effort and struggle, however. The show makes no qualms about the amount of hard work needed to succeed in life. Daniel’s character is basically spoon-fed part-ownership of his family’s company, Mode Magazine, but it is clear how much he personally needs to change in order to make his company thrive. Betty’s father is portrayed as a hard-working Mexican immigrant who raised his daughters nearly solo when their mother died when Betty was young. Even Wilhelmina works her behind off, although her methods are unconventional, to say the least.

The materialistic and at times conniving world of fashion and business is starkly juxtaposed to the loving, tight-knit world of Betty’s family. Themes of familial loss, single parenthood, young adulthood, sexual orientation, and acceptance make up the thread of the show. Other important themes abound: love, trust, forgiveness, friendship, generosity, selflessness, and honesty are but a few of the lessons we can learn about through watching Ugly Betty. Not only is it filled with tear-shedding moments, but it is also hilarious with Mark and Amanda’s characters always poking fun at Betty’s appearance. One of my favorite scenes is when a young Betty is leaving work on a cold winter’s night and zips up her giant blue down jacket, while Mark walks by her in the background and proclaims, “Slimming!” in his ever-flamboyant way. 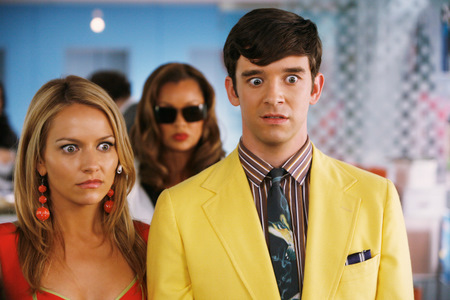 This is a show I’d watch with my kids when they are teenagers because it speaks volumes about so many real moments, feelings, and experiences of life in America. It teaches us to always be open to learning from others, no matter how different from us they may seem. And in this ever-changing, ever-diversifying world, this is more important than ever.

If you’re interested, check out all four seasons for free on hulu!