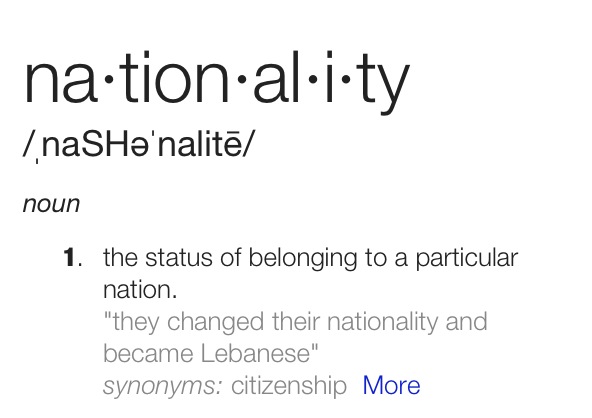 Since Monday morning, I have been taking in the positive and negative feedback towards Nina Davuluri’s winning of the 2014 Miss America crown and $50,000 scholarship. Ms. Davuluri is the first Indian American (not to be confused with American Indian, aka Native American) woman to win the title of her state, New York, and the first Indian American to win the Miss America pageant. As an Indian American myself, I was delighted by this news. I did not even know the pageant had happened until the next morning when an excited (white) colleague shared the news with me. I quickly Google searched “Miss America,” only to be faced with articles about negative and racist reactions. Temporarily deflated, I went on to learn more about this young woman and all the ways in which she is a huge inspiration to us all, regardless of color, ethnicity, and religion, everywhere. Over the next few days, I grappled with conflicting emotions.

I felt proud that Ms. Davuluri is well-educated and driven to pursue medicine. From her interviews, she makes this very clear. Like me and many other children growing up today in America, Ms. Davuluri is the child of immigrant parents. Her parents came here to offer their kids a better future with the faith that America was a better place than their own homeland for that to happen. Let that sink in. No “patriotic” American would likely consider that another country might be better in some ways than their own. Perhaps they have not experienced the world enough to know there are saner places to live. Places where there are gun laws enforced and multiple mass shootings per year don’t get brushed under the rug because politicians are afraid of lobbyists. Places where health care is not seen as a luxury but a necessity. Places where everyone knows that eventually everyone will get sick and die, so health care is valued to assure that people do not go bankrupt (in addition to being sick), forcing them to exit the work force which upholds the economy of their country. Places where science and math are taught as fact, not as theory/opinion. There are of course worse places to live and die than the U.S., but some things that are seemingly easy problems to correct are so absurdly debated and perpetuated here.

Of course, racism and bigotry exist in all countries. It even exists within ethnicities against their own people. As much as I believe that Indians all over the world were jubilant at Ms. Davuluri’s accomplishments, I know there are plenty out there who, secretly or openly, find her too dark-skinned to be beautiful. Taking a look at previous Miss India winners, it’s clear that Ms. Davuluri would not have made it in her parents’ country of origin. 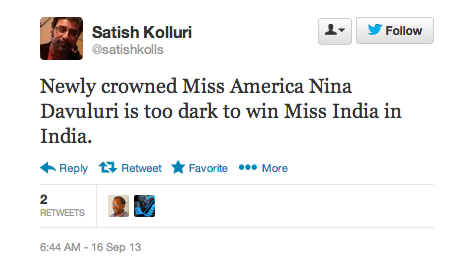 One thing that had been discussed over and over again in response to the racist remarks was how Ms. Duvuluri is Indian, she is not Arab, India is not in the Middle East, and she is not Muslim. Well, I was hoping to read something that finally said, “And even if she were Arab or Muslim, so what?!” I finally read an excellent article today that talked about this eloquently. We should not simply say, “She’s not Muslim/Arab.” We should be saying, “She is American.” Again, ethnicity and nationality are two different things. Anyone who is an American citizen and fulfills the pageant’s requirements can enter and win, and what most people still have trouble dealing with is that Muslim Americans are Americans too. The religion of Islam is not the enemy of the United States. Sadly, too many people believe this. But those who believe it do not seek to learn anything about it. Instead, they go on forming their opinions (which they take to be absolute truth) about who is Muslim, how they look, what they believe, what they feel, what they wear, how they act, and why they should be hated. They do not seem to realize that terrorists are a minority, just like Christian fundamentalists in America are a minority. They also fail to realize that Islam accounts for 23% of the world’s faith. It is the second largest faith after Christianity. It is monotheistic and Abrahamic, like Christianity and Judaism. It originated in the Middle East, like Christianity and Judaism. News flash: continuing to hate and bomb 23% of the world is just not going to work in your favor. I wonder what people will start saying when they learn she’s Hindu – gasp!!! A pagan!!! They’ll be even more confused if they learn that the Hindu scriptures are older than the Bible. What? Isn’t the world only 6,000 years old? 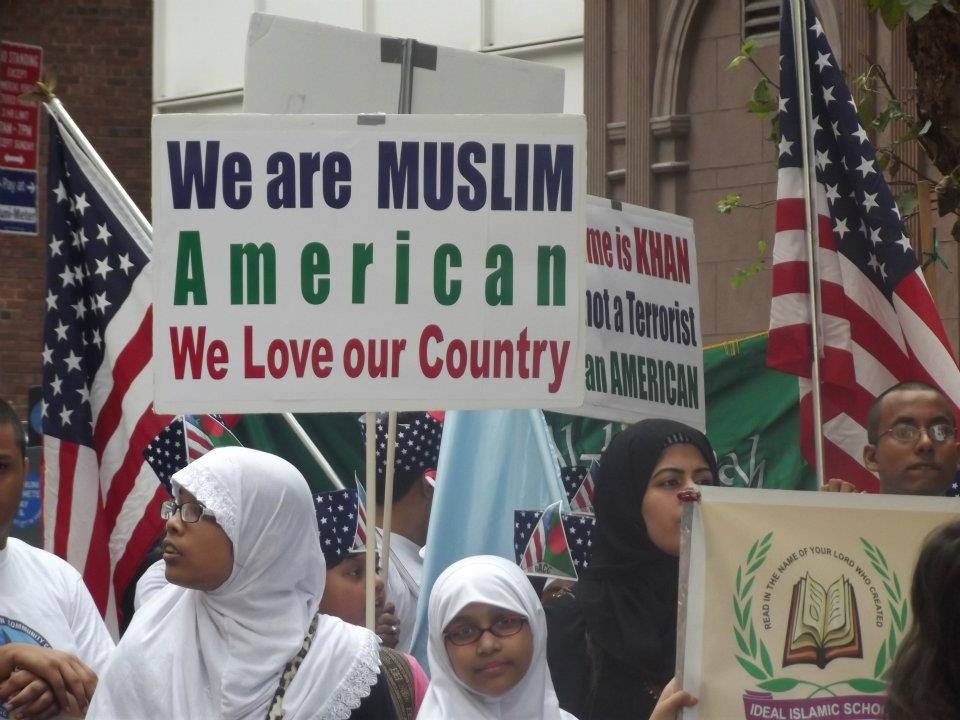 Physical beauty aside, the $50,000 scholarship Ms. Davuluri won was among the highest rewards because it will help her advance in life and achieve her goals. Medical school tuition is obscenely expensive, and most medical students graduate with at least $200,000 in student loan debt. Then tack on interest. $50,000 will help her realize her own American Dream without crippling her financially. I am not a huge fan of swimsuit rounds and the like, but it’s a better way to pay for school than Walter White-ing it.

Finally, the article mentioned above touches on cultural appropriation. AMEN!!! My ethnicity is not a fad, a runway show theme, an MTV music video, or a Halloween costume. Ms. Davuluri chose a very energetic and joyful performance of Bollywood dance infused with elements of classical Indian dance. Classical Indian dance (of which there are eight forms) is an ancient, revered, technically skilled art form. Ms. Davuluri was trained in Kuchipudi, one of the classical dance forms that originated in Andhra Pradesh, the Southern Indian state from which her family originated. It is not bhangra (which is more of a folk dance), and it is not easy. Those hand gestures she makes are not of the “screw the lightbulb, pat the dog” type. They are called mudras, and each one has a specific significance in Indian dance.

Likewise, classical Indian music is not for the enjoyment of a bunch of weed-smoking, incense burning, tie-dye wearing hippies. It has a rich history and is respected the world over as much as Beethoven or Chaikovsy are. As the late Pandit Ravi Shankar stated:

“I was lucky to have been there at a time when society was changing. And although much of the hippie movement seemed superficial, there was also a lot of sincerity in it, and a tremendous amount of energy. What disturbed me, though, was the use of drugs and the mixing of drugs with our music. And I was hurt by the idea that our classical music was treated as a fad — something that is very common in Western countries. People would come to my concerts stoned, and they would sit in the audience drinking Coke and making out with their girlfriends. I found it very humiliating, and there were many times I picked up my sitar and walked away. I tried to make the young people sit properly and listen. I assured them that if they wanted to be high, I could make them feel high through the music, without drugs, if they’d only give me a chance. It was a terrible experience at the time. But you know, many of those young people still come to our concerts. They have matured, they are free from drugs and they have a better attitude. And this makes me happy that I went through all that. I have come full circle.”

In other words, show some respect.